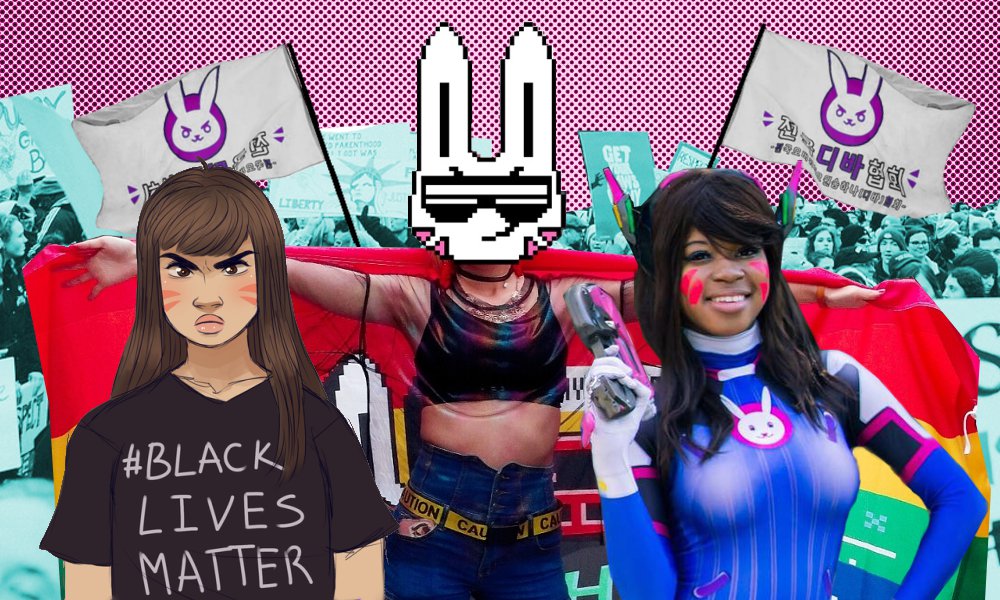 For a while, it looked like Hanzo was getting all the glory, even if it was for the wrong reasons. A difficult character in the online team shooter Overwatch, those who played him before fully mastering his abilities quickly developed a bad reputation. Cards Against Humanity stoked the fire, buying billboard space to label President Trump a Hanzo Main. Then, a young girl was given detention for artfully employing the same phrase against a fellow pupil. Before long, Hanzo was the name you knew, even if you didn’t play Overwatch.

But while Hanzo was, perhaps unfairly, gaining fame as a subject of ridicule, fellow hero D.Va was quietly overtaking him to become a vastly more inspirational icon.

Otherwise known as Hana Song, D.Va is a former professional gamer from South Korea. Recruited by her government to pilot an armoured drone unit in the fight against a “colossal omnic monstrocity” – that’s a giant robot, to you and me – she’s famous for her incredible gaming skills, as well as her aptitude for warfare. And, of course, she’s a character in a video game. Yet in the year and a half since Overwatch launched, D.Va has come to symbolise the kind of fervent advocacy politicians could only dream of.

Her South Korean heritage, for example, has come to mean far more than a line from her backstory. After South Korean president Park Geun Hye used being female as an excuse for facing corruption charges, a network of women across the country formed an activist group called For D.Va, or The National D.Va Association, to protest in the name of feminism. Using the Overwatch character as a mascot, the group began to attract widespread attention when they attended the Women’s March, with photos popping up across the internet of their D.Va flags and stickers. When Park Geun Hye was suspended, the group refocused on the issue of equality in gaming.

After all, when it comes to gaming, few countries are as serious, or as sexist, as South Korea. But when I talked to the leader of The National D.Va Association, who chose to remain anonymous, she pointed out that the hostility women face in esports is exactly what makes D.Va the ideal figurehead for their cause. “She is a woman, yet thrives in the gaming world. The reason she became our mascot is because we thought that in a sexist country like ours, it would be impossible for a person like her to appear.”

Impossible, mainly, because D.Va is a professional StarCraft II player. And while an Overwatch character playing another Blizzard game might seem like nothing more than a canny bit of self-promotion, it’s actually what makes her an aspirational figure to female gamers in South Korea. In the esports world, StarCraft II is a titan. Fiercely competitive and intensely played, it was for many years the highest paying title in competitive gaming; so popular, in fact, that industry behemoth Twitch owes much of its early success to Starcraft streamers. For women in South Korea, where the game was once considered an unofficial national sport, it’s easy to see why the idea of a female competing at the highest levels of StarCraft II is incredibly inspiring.

Not everyone is as enthusiastic, though. When I ask about the reaction to their mascot, and The National D.Va Association in general, their leader says the group has faced a backlash similar to the aggressively misogynistic campaign Gamergate. “Thanks to the D.Va symbol, we did get quite a lot of attention, and it helped form a strong core. However, it also became the main target of attack for many sexist people.” Nonetheless, the group have no intention of playing down D.Va, simply saying, “We act for feminism under her emblem, so that someone like D.Va could actually appear.” And having been sent a tidal wave of support and gratitude “not only from Korea, but all over the world”, it’s clear there are plenty of people behind their mission for equality in gaming. 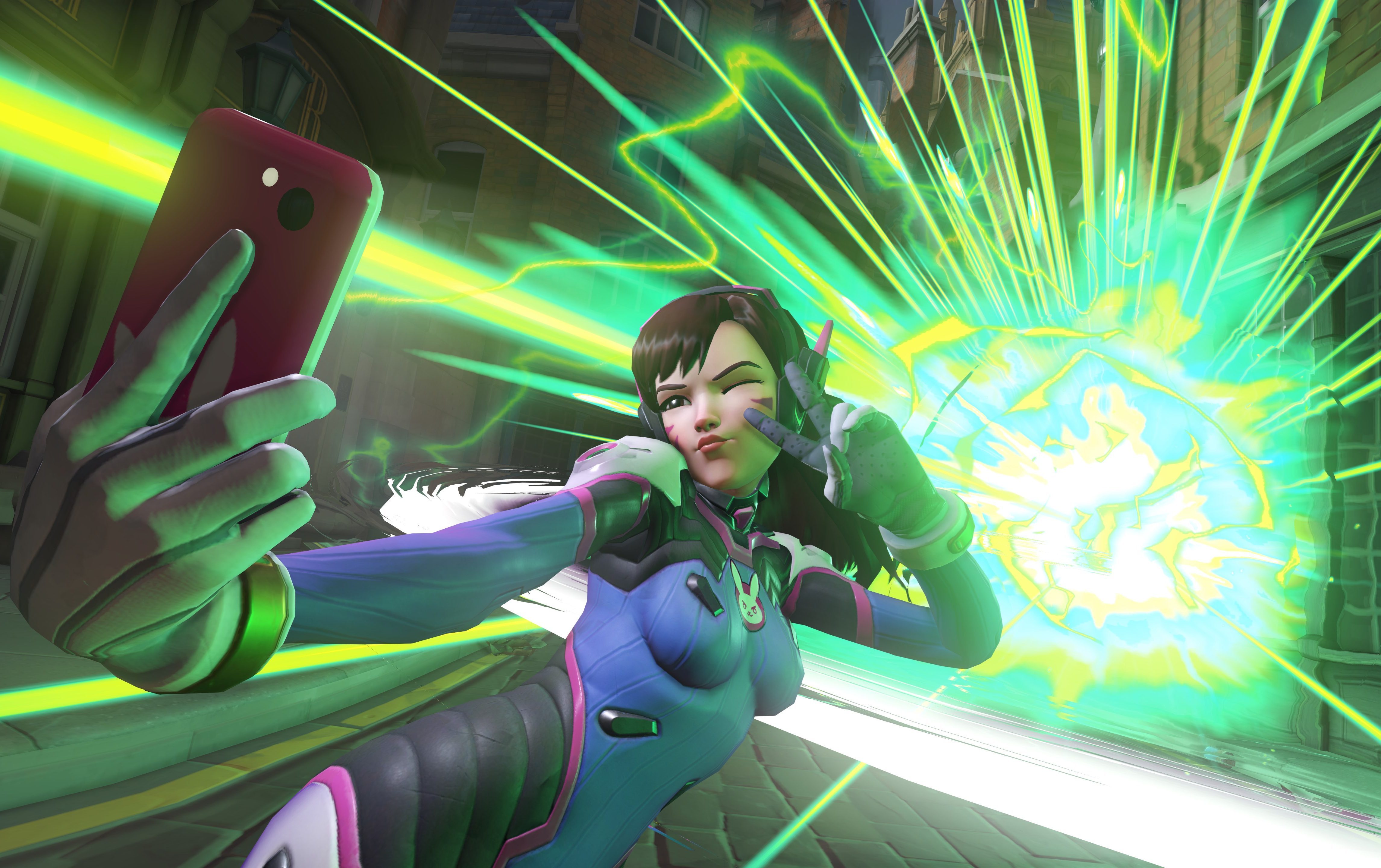 Of course, the global reaction to The National D.Va Association is yet more proof that Hana Song’s influence has spread far further than her adoring homeland of South Korea. In the US, for example, many black cosplayers have taken to dressing as D.Va as an act of defiance against racism in the cosplay world. Unsurprisingly, as a beloved hero from an equally beloved game, D.Va has fast become a popular costume, with takes on the mech-clad character popping up at conventions around the world. However, despite the fact that the South Korean character is frequently played by white women, cosplayers of colour who dare to don the suit have been widely subjected to horrendous racist abuse.

Krissy Victory, from Michigan, USA, was one of the first prominent cosplayers to begin dressing as D.Va, having been instantly drawn to the Overwatch hero. “D.Va is fiery, fun and silly, but gets the job done. She’s pretty much me if I had a giant mech. I used to live in Korea as an exchange student, so I was already into the culture, and I thought D.Va was so adorable.”

But after debuting her costume at the Anime Central convention, it didn’t take long for the racism to begin. “People were calling me the n word, monkey, ape. Telling me to kill myself. I didn’t take it well for weeks – I didn’t want to go on my pages, as all I’d see was people mocking me on social media. But my brother and some friends would jump in to defend me – he told me to keep cosplaying, be D.Va, push through this and it will get better. And he was right. I couldn’t see it at the time because I was so angry and hurt and upset that I was the butt of everyone’s joke, simply because I was black.”

After Krissy began re-posting the racist attacks she received online – including one particular gem in which a commenter explains that his “funny” comment calling her “N.Ga” couldn’t possibly be offensive, because he has black friends – the support and encouragement she received made her realise she, and others, shouldn’t stop cosplaying.

“At first, all of the backlash was discouraging black girls to even want to be D.Va. It made me sad that a lot of girls thought like that, but I can’t blame them –  it was a giant shit show of racism. But me being D.Va regardless is what made people keep on. My response was ‘fuck ’em, keep doing it to piss racists off’. I meant that, and so other girls stepped up to the plate and decided “Why not piss racists off as well?”. Let’s all be D.Va!”

It’s a sentiment echoed by Karena Ingram, a cosplayer from Baltimore. A composer by day, she loves D.Va for being “a badass woman of colour who is a world-class competitive gamer, destroying people in a giant mech”. 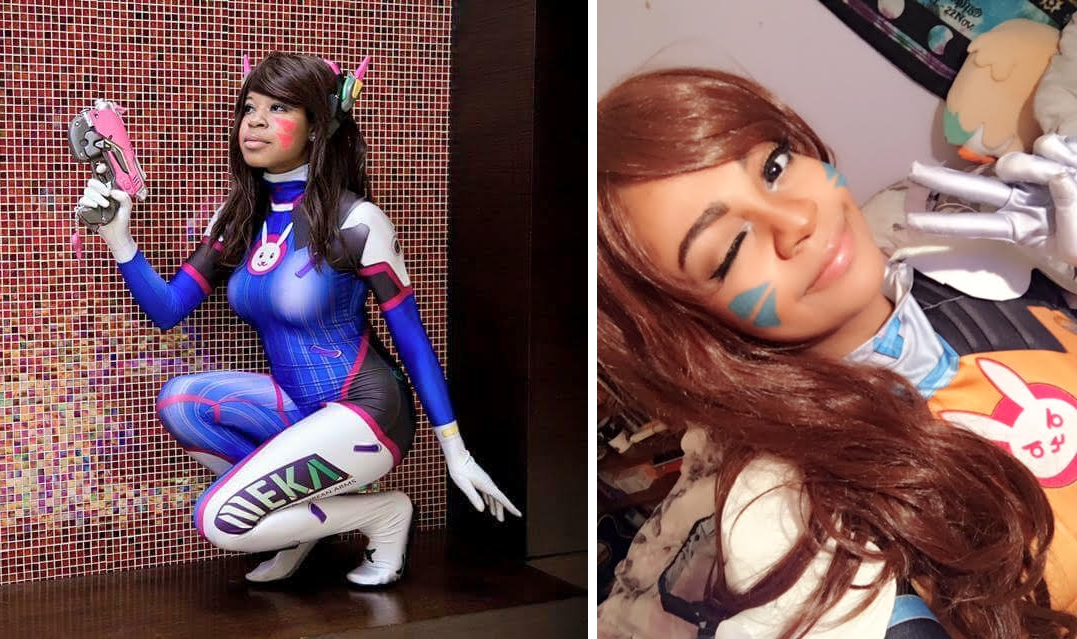 Despite being a gamer since childhood, cosplay’s lack of diversity initially put Karena off. “I was hesitant to play D.Va for a while because at first, the only type of women I ever saw cosplay D.Va – and it be well received – were thin, tall, white women. But after seeing other black women, and women of colour of all shapes and sizes cosplay D.Va and look amazing, I overcame my fears and did it”.

However, although she feels like she “can take on anything” as D.Va, Karena acknowledges that the cosplay scene still has a long way to go before everyone feels welcome.

“The experience of beautiful, talented, dark-skinned cosplayers is faced with so much hatred and discrimination. But I’ve also seen them rise above that racism and create some of the most creative, most detailed cosplay that I’ve ever seen. When I was younger, I was hesitant of cosplaying because I didn’t think I was allowed to be a character who wasn’t black, and there weren’t many to choose from due to the lack of representation in the media. It was my boyfriend, who is also black and regular con-attendee, and all the the confident black cosplayers that give me the confidence to cosplay despite the hate.”

And as for why she thinks D.Va has become such an icon to cosplayers? “She’s not only a strong tank player in Overwatch, but she’s attractive, adorable, strong, and super confident. I think people are drawn to characters that they aspire to be, and with D.Va’s charisma and nerve, she’s a cool role model for people.”

Being a role model, however, also means D.Va fans are often fiercely protective of the character, as well as the welcoming and inclusive environment Overwatch has created. When Blizzard released a new police officer skin for the popular hero, many players were outraged at the idea of a minority character supporting police brutality, especially in the face of the Black Lives Matter movement.

One such fan was Ellie R, the artist behind a viral image of D.Va in a Black Lives Matter tee. She created the artwork after feeling let down by D.Va’s police skin.

“While I am aware that it means something different to the women of South Korea, the same can be said about people in North America. Where in one country it might represent a changing perspective, in another it simply represents the status quo and upholds the idea that the police can do no wrong. To me, it was heartbreaking to see a character I loved so much dressed in this way. And to my black friends, even more so.”

The image was incredibly controversial online, and was regularly doctored with Nazi symbols and the All Lives Matter hashtag. In addition, Ellie trended negatively in South Korea, and was consistently sent abuse, including racial slurs. Despite this, she’s still proud of the piece she created, and the message behind it.

“So many people were so happy to see their favourite character rooting for them. Supporting them, loving them. I think that’s so important and so incredibly humbling for me as well. No matter the overwhelming amount of hatred that was thrown my way, the positivity always drowned it out in the end.”

Of course, it isn’t surprising that Overwatch has garnered such passionate, positive fans, given that the game differs greatly from traditional first person shooters. Long considered a space for men, and developed as such, the overt sexism found in many FPS games is incredibly off-putting. As such, Blizzard’s accessible take on the genre has been received with an outpouring of enthusiasm, and despite the title’s own issues with toxicity, Overwatch has twice as many female players than any other FPS. In addition, the game is deliberately diverse, with the hero roster including female, queer and non-gendered characters, as well as a range of ethnicities. Unsurprisingly, players took to the game en masse, rocketing it to 30 million active users and making it the fastest title in Blizzard’s library to reach $1billion in revenue.

However, the positivity found in Overwatch is no accident, says game director Jeff Kaplan. Speaking at the DICE Summit in February, he explained that the game was specifically designed to make “people feel included and welcomed.” As Kaplan put it, “inclusivity and open-mindedness was the goal. Diversity was the beautiful end result”. 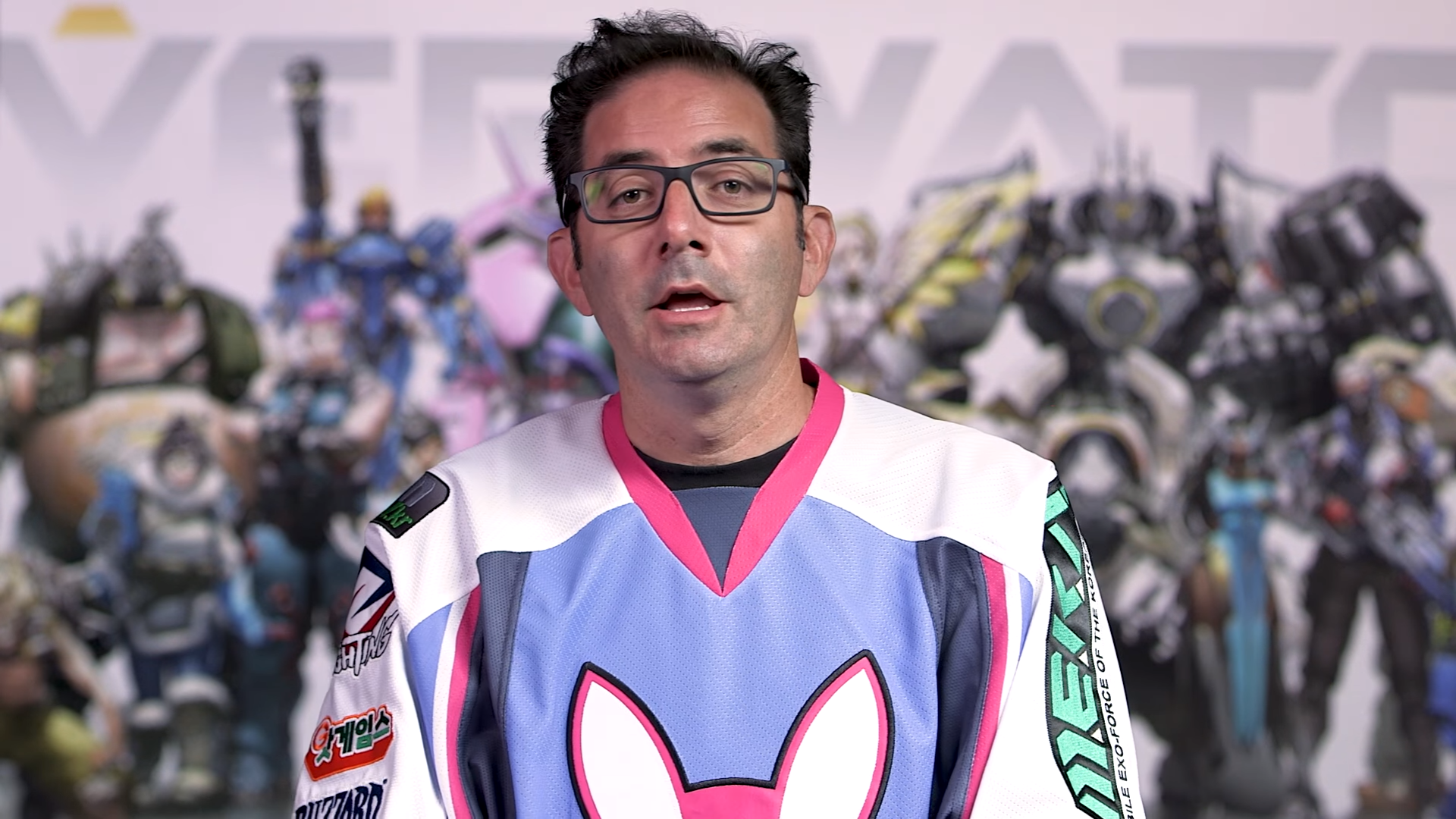 Kaplan in his D.Va inspired jersey

Of course, if you still need proof that D.Va is a modern day icon, note that even Kaplan isn’t immune to her charms. In June, he set social media alight when he appeared in a developer update video wearing – what else – a custom D.Va jersey.

Overwatch League: Everything You Need To Know
Close cookie popup