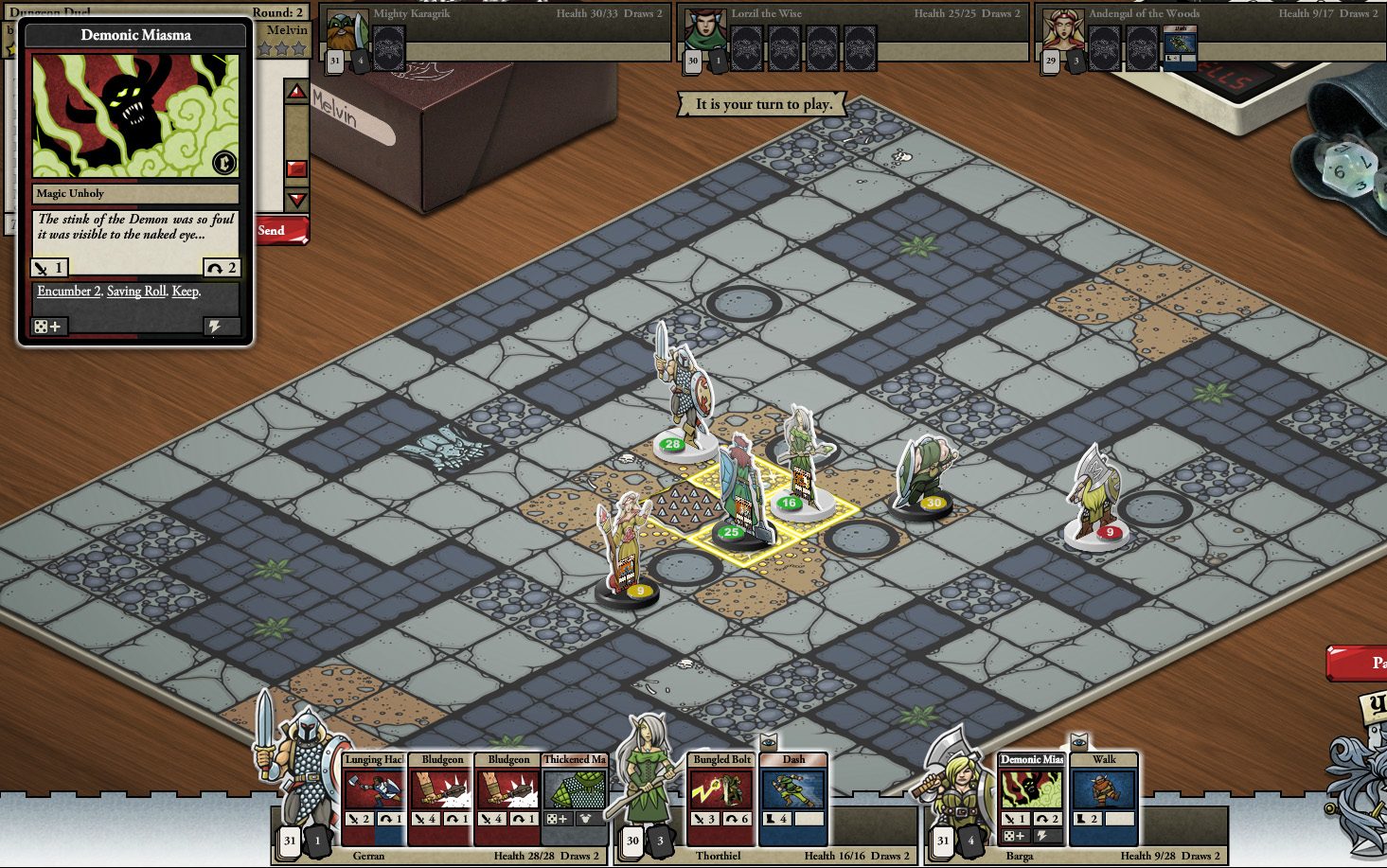 Look, it’s no secret that Team BVG is dangerously obsessed with Magic: The Gathering. So, when Blue Manchu’s new title Card Hunter was described as ‘Magic meets an RPG’, we were immediately interested. Then we found out that the team behind the game is made up of industry vets from BioShock, Thief, and oh, just the actual creator of Magic: The Gathering. By the time we’d realised Card Hunter is free, we were already throwing money at our screens in a futile attempt to download the game.

Luckily for us, Card Hunter more than lived up to our panicky, breathless, slightly sweaty anticipation. As it turns out, ‘Magic meets RPG’ is a pretty apt description; with elements including CCG, strategy and turn based combat, the slick Steam game is easy to pick up but dangerously addictive to play.

It’s fairly straightforward at the start – choose a hero class, equip it and then attempt to fight your way across the board. This, however, is where the deck-building comes in. Each piece of loot you collect will give you a selection of cards, and those cards provide you with board moves, abilities, defence and attacks. In addition, the type and quality of the loot directly determines what cards you get – weak boots will let you move a short distance across the board, while a powerful sword will grant you strong attacks. 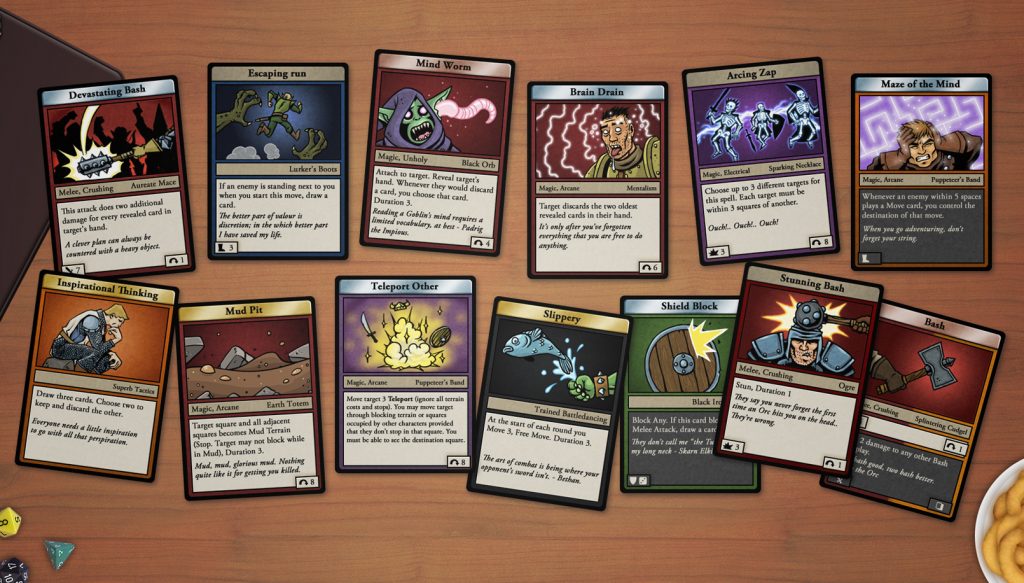 Before each battle, you’ll be given the chance to modify the deck you’ve created, and once you start, your four card hard, drawn from the deck, will determine what you can do during each turn. Some actions you’ll get to choose, and some will be activated by chance, with the game rolling a dice for certain actions and attacks. This can, at times, make the game frustrating – you can spend an entire turn doing nothing because you drew a poor hand, or rolled nothing but ones.

As the game progresses, the card choices you make will become far more important. Combat is simple enough, with enemies placed around the board, obstacles that hinder movement and turn-based attacks. But as you fight your way to more difficult levels, you’ll need to choose cards that let you traverse difficult terrain, reach line-of-sight monsters or beat enemies resistant to certain attacks. This means meticulously planning a deck balanced enough to deal with the element of chance, but specific enough to defeat the unique foes you’ll encounter in each adventure. 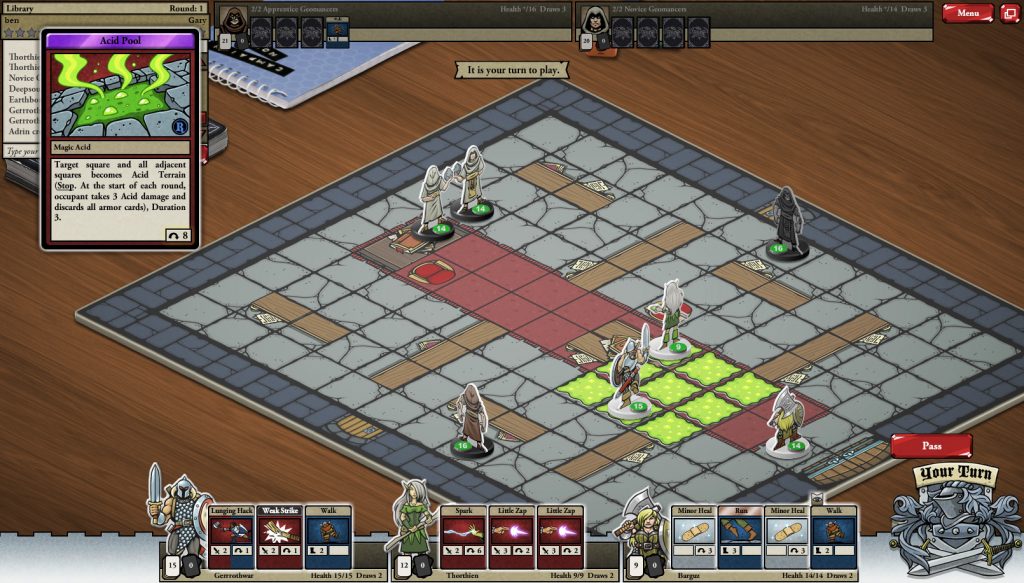 Each win will unlock new locations on the map, as well as loot to add to your inventory. However, you can also do both by purchasing the in-game currency, pizza slices, which will let you unlock special levels, buy gold, chests and figures, and if you’re anything like us, leave you constantly craving a cheesy slice. Despite this, Card Hunter really is completely free to play – at no point did we feel disadvantaged during our initial playthrough, something that’s rare in the world of micro-transactions. That said, the extra loot drop you get at the end of each battle for being a member of the Card Hunter club will make it well worth joining for some.

However, it isn’t just the carefully crafted gameplay that makes this game such a joy. Card Hunter beautifully replicates the nostalgic experience of ordering a pizza, hiding from your annoying siblings and playing through a tabletop adventure with your friends. In addition, the online multiplayer function means you can replicate the experience, but – importantly – without having to share your pizza. 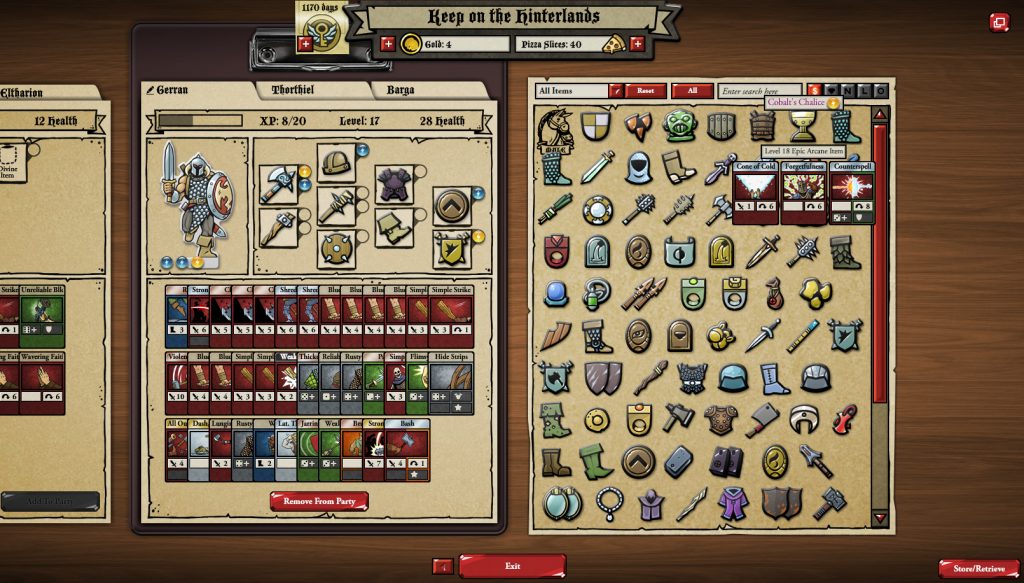 We also loved the dialogue in the game, which is impressive, considering there isn’t much of it. The endearingly bumbling GM Gary and his pompous older brother make for a hilarious guide through the Card Hunter world, whether they’re arguing about ooze or accidentally ignoring the cute pizza girl’s attempts to join in. In fact, her character is a pretty perfect example of women in gaming – while you’ll probably be overlooked or underrated at first, there are also plenty of people who’ll make you feel welcome.