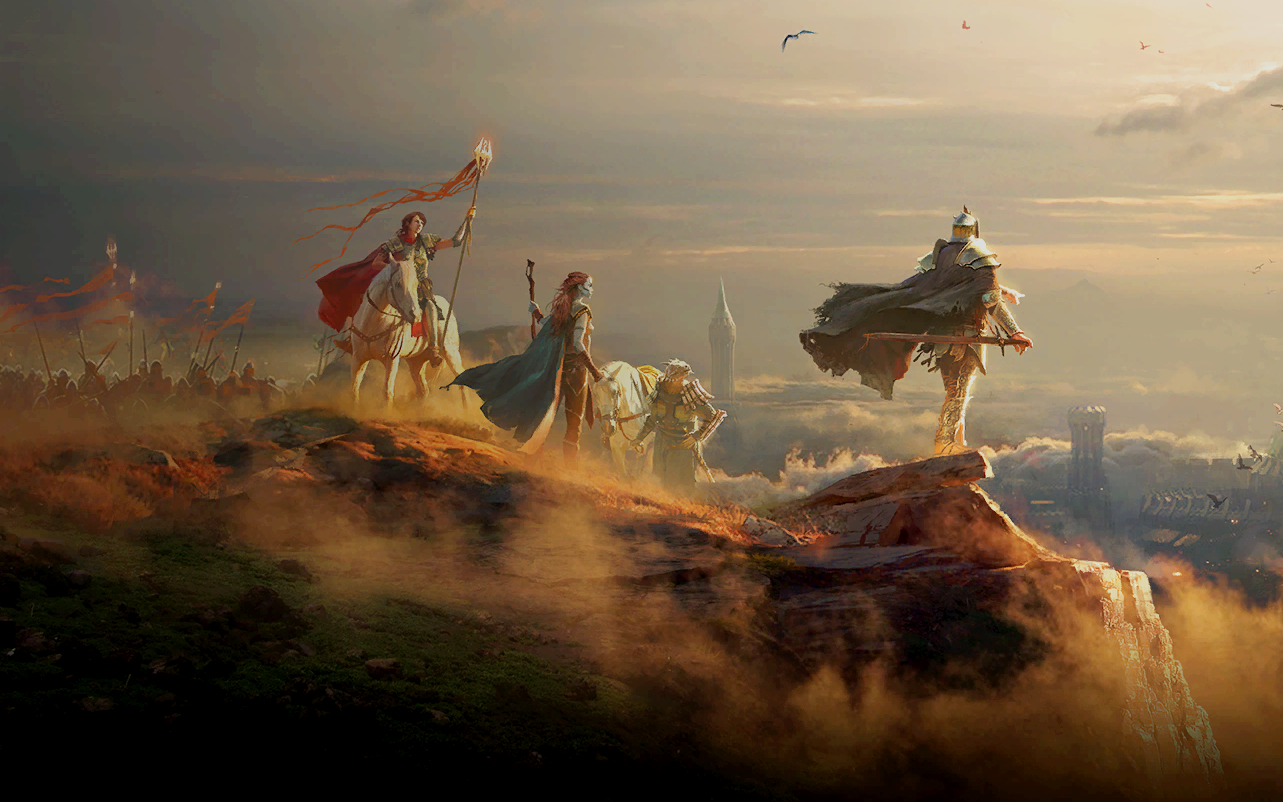 In a market full of CCGs, Elder Scrolls Legends, the latest offering from Bethesda, needs to be something special in order to stand out. Based, obviously, in the world of Elder Scrolls, the game is the studios’ first foray into the world of collectible card games, a move obviously inspired by Blizzard’s smash success in turning World of Warcraft into Hearthstone.

Before we begin, let’s talk originality. CCGs have been around for a while now, and many different themes, abilities, and mechanics are almost universal across most games in the field. This makes truly original ideas difficult to come by, so we’re judging the game, like we do all CCGs, mostly on the execution of ideas, rather than how novel they are. That said, we still appreciate being surprised by something new, and Elder Scrolls Legends has definitely managed to do that.

To begin with, The Elder scrolls Legends gameplay is a bit more complex than comparable CCGs, but pretty straightforward to understand once you get going. You start with a 50 card deck, three card hard, 30 life, and a random roll of going first, or a three-use Magicka ring (one extra Magicka for each turn you use it) – useful, as Magicka is the resource that allows you to cast spells. You can swap out any and all cards you don’t want in your hand and draw replacements. 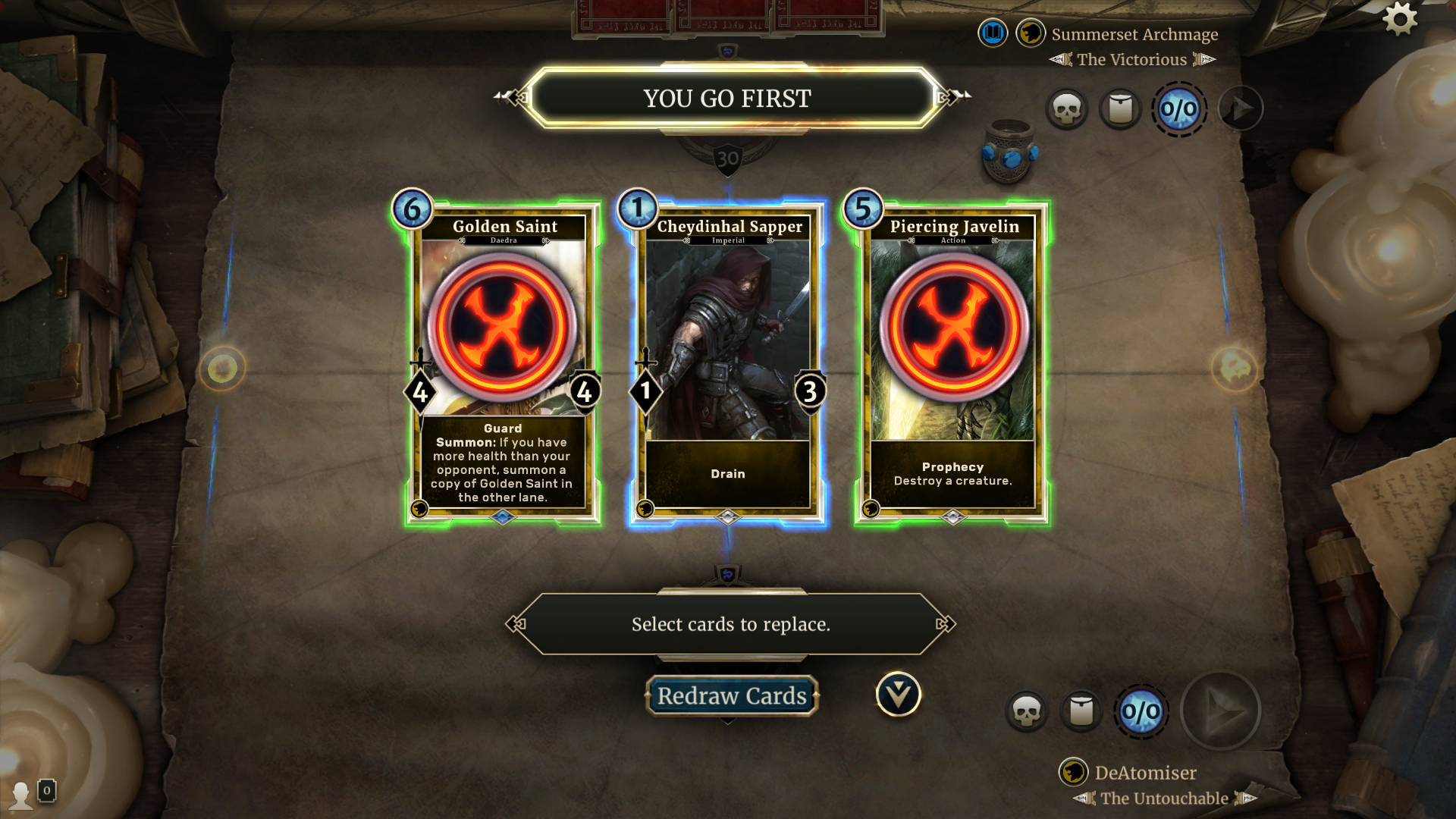 At the beginning of each turn, you draw a card, your maximum Magicka increases by one, and your Magicka refills to maximum, with unused Magicka removed. The battlefield – where the game takes place – has two lanes, The Field Lane and The Shadow Lane, with The Shadow Lane giving creatures Cover, allowing them one turn of respite before they can be attacked. Creatures can only attack opposing creatures in the same lane. There are four card rarities; common, rare, epic, and legendary, and four card types; actions, creatures, items, and supports. Actions are cards that have a specific one-off purpose, for example kill a creature or damage your opponent. Got all that?

Creatures, as in most CCGs, are the work horses of the game, so they are the most common card type in almost all decks. Creatures’ power and toughness represent the damage they do to other creatures and players, and damage they can take before dying, respectively. 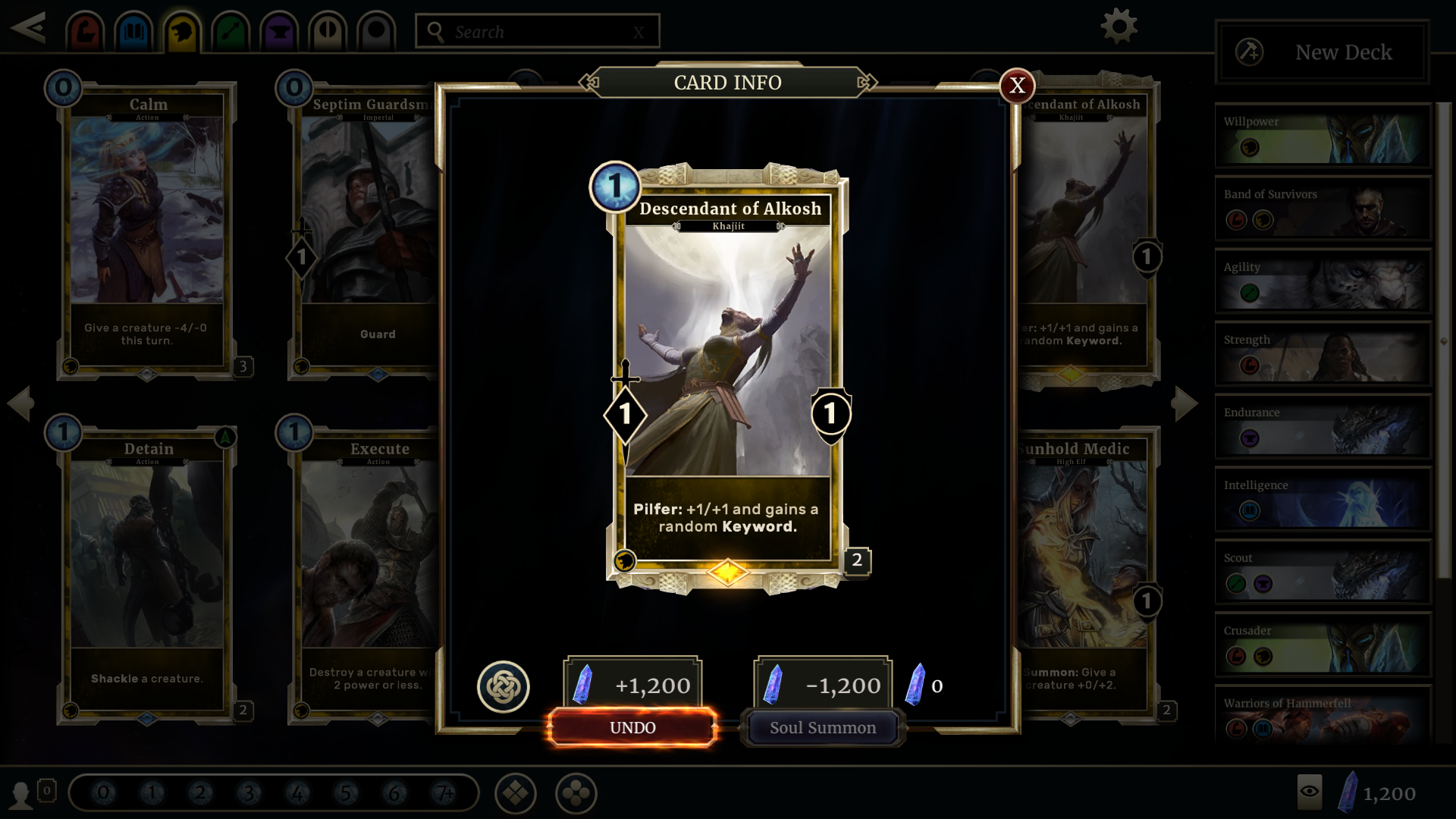 Items are cards designed to permanently buff your creatures power and/or toughness once, often with other interesting benefits. Finally, Support cards are multiple use or ongoing cards that can effect your creatures, your life totals, and more. Your creatures can attack once each of your turns, but also must wait one turn before attacking once they have entered the battlefield. Each player has five rune stones representing five health totals – 25, 20, 15, 10, and 5 – and once you reach them for the first time each game, you can draw a card. I’ll discuss this in more detail later, as it’s not quite the advantage it sounds like.

Cards can have special abilities that interact with the game in specific ways, and for those of you who have played other popular CCGs, you may see some similarities (which I’ll mention in brackets). Charge enables creatures to attack the turn they enter the battlefield (Haste, also Charge). Breakthrough enables damage dealt from your creature that isn’t required to kill the attacked creature to be assigned to the opposing player (Trample). A creature with Guard prevents your opponent from attacking anything else until it is killed (Taunt). Prophecy on a card allows you to play it for free, if you drew it from a rune stone (unique to ESL – and very beneficial or terribly frustrating). 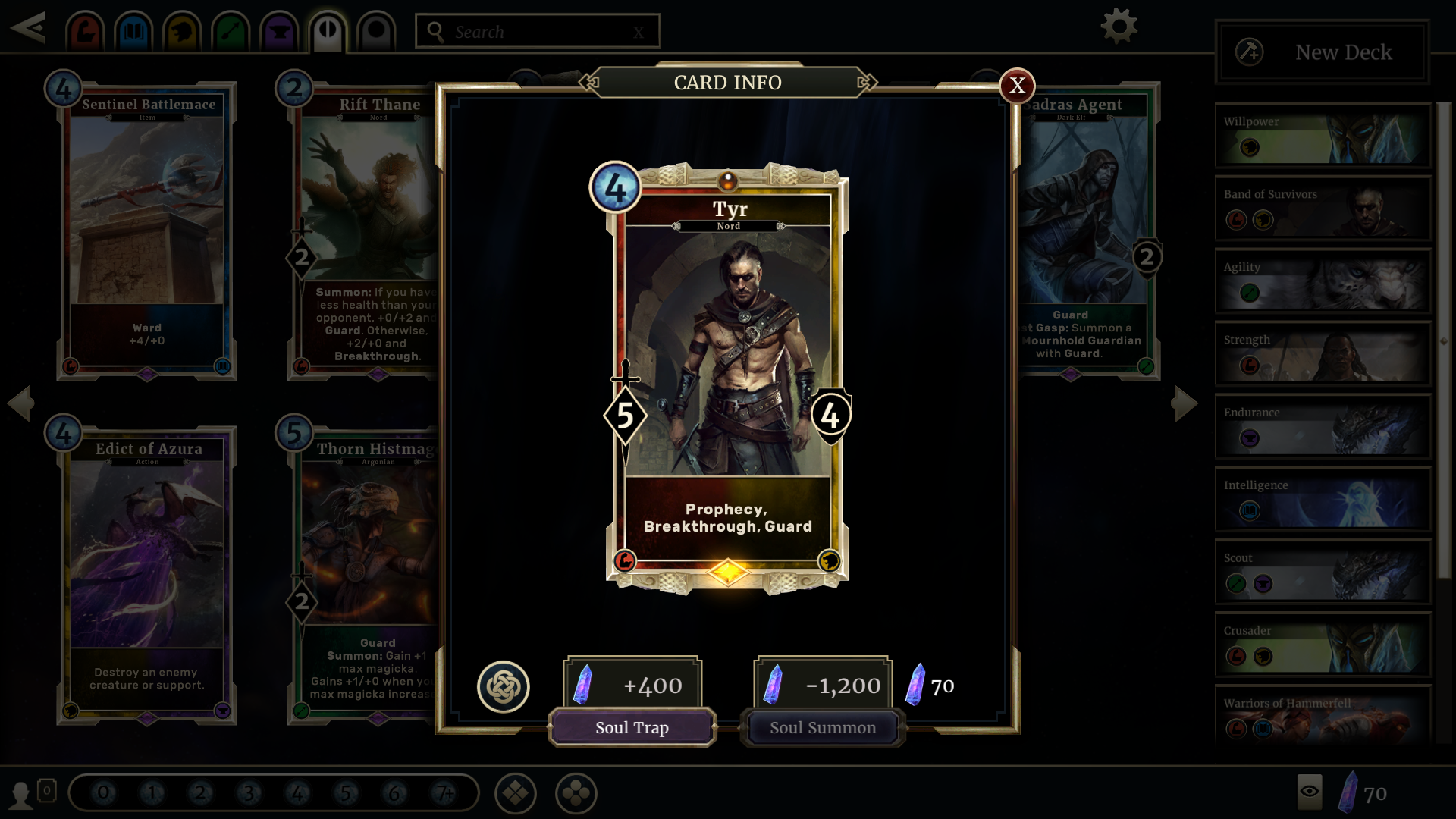 Slay, Summon, and Last Gasp are all similar abilities giving creatures an extra effect, on killing another creature, entering the battlefield, and on death, (respectively, unique to ESL, Battlecry, and Deathrattle). A creature with a ward prevents damage the first time it would take it, then the ward is removed (Divine Shield). Lethal on a creature ensures any damage it does to another creature destroys it (Deathtouch). A creature with Regenerate heals itself at the start of your turn (unique as a keyword ability). When a creature with drain deals damage on your turn, you will gain that much health (Lifelink). A creature with Pilfer has an added bonus when it damages your opponent (unique as a keyword ability). Cover, which I’ve already touched on gives a creature one turn where it can’t be attacked (similar to Stealth). When a creature is Shackled it can’t attack for a turn (Freeze).  And lastly, Silencing a creature removes any abilities items or stat modifications on that creature (similar to Silence).

The game types are Story Mode, Practice battles against AI, Play Mode gives you the option of casual or ranked PVP battles, and Solo and Versus Arena – Elder Scrolls Legends’ draft format. 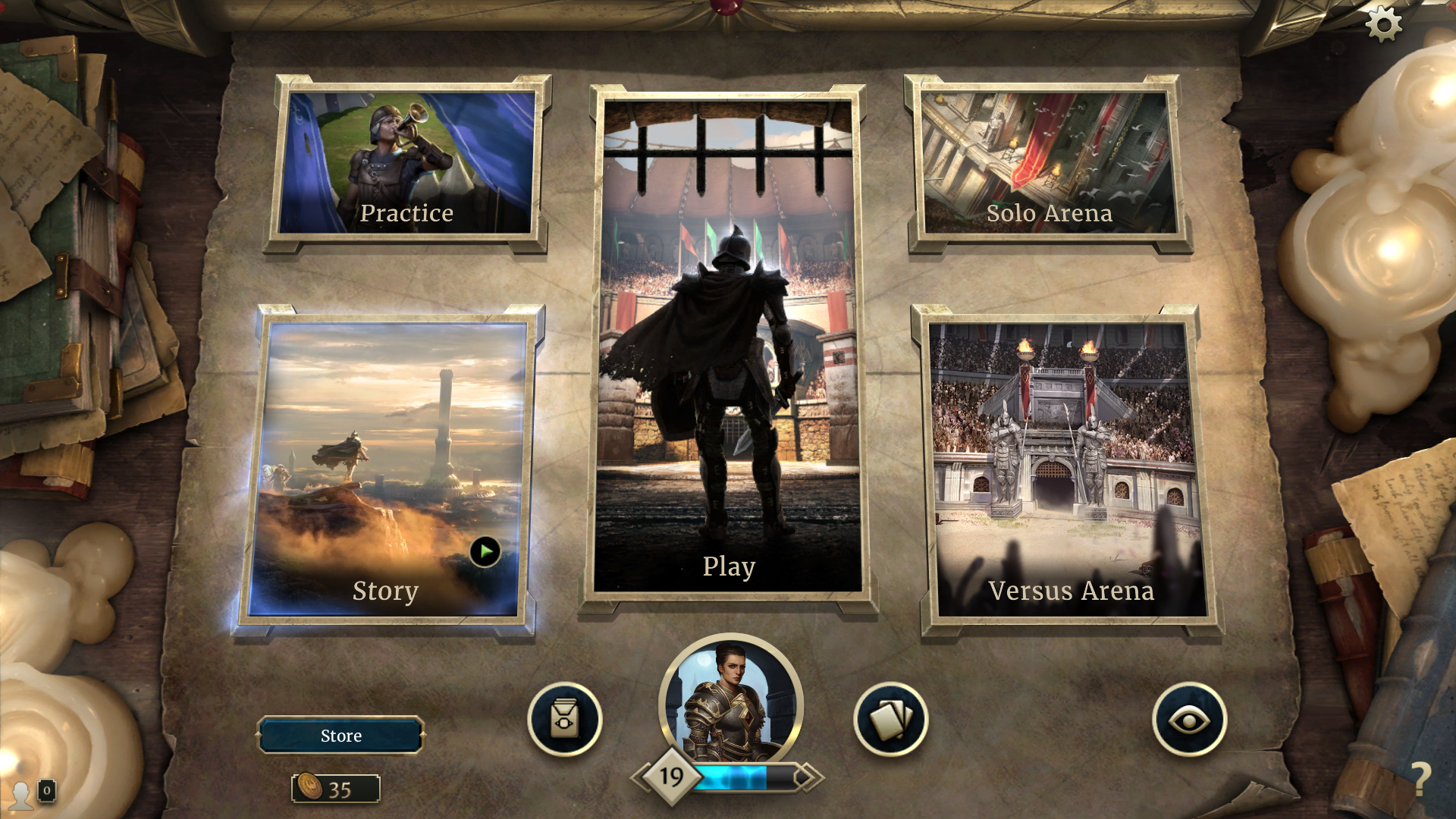 ESL, as a free to play, micro-transaction game, it has three currency types; Soul Gems – which can help you fill out your card collection, Gold – which buys you boosters or entry into certain game types, and event tickets – which grant you entry into a tournament. You can also purchase, with real money, boosters, Gold and entry tickets.

The free story line gives you a basic handle of the game, with the odd challenge. A walkthrough of sorts, it takes you through the story of a slave changing his fate thrown in the mix. The story was quite long and the battles were testing at times, but with stilted writing, it seems they had an outline of the battles they wanted before they had a story, and so made one to fit. However, at the end of each story battle, you do receive a small Gold reward, making it worth your while. 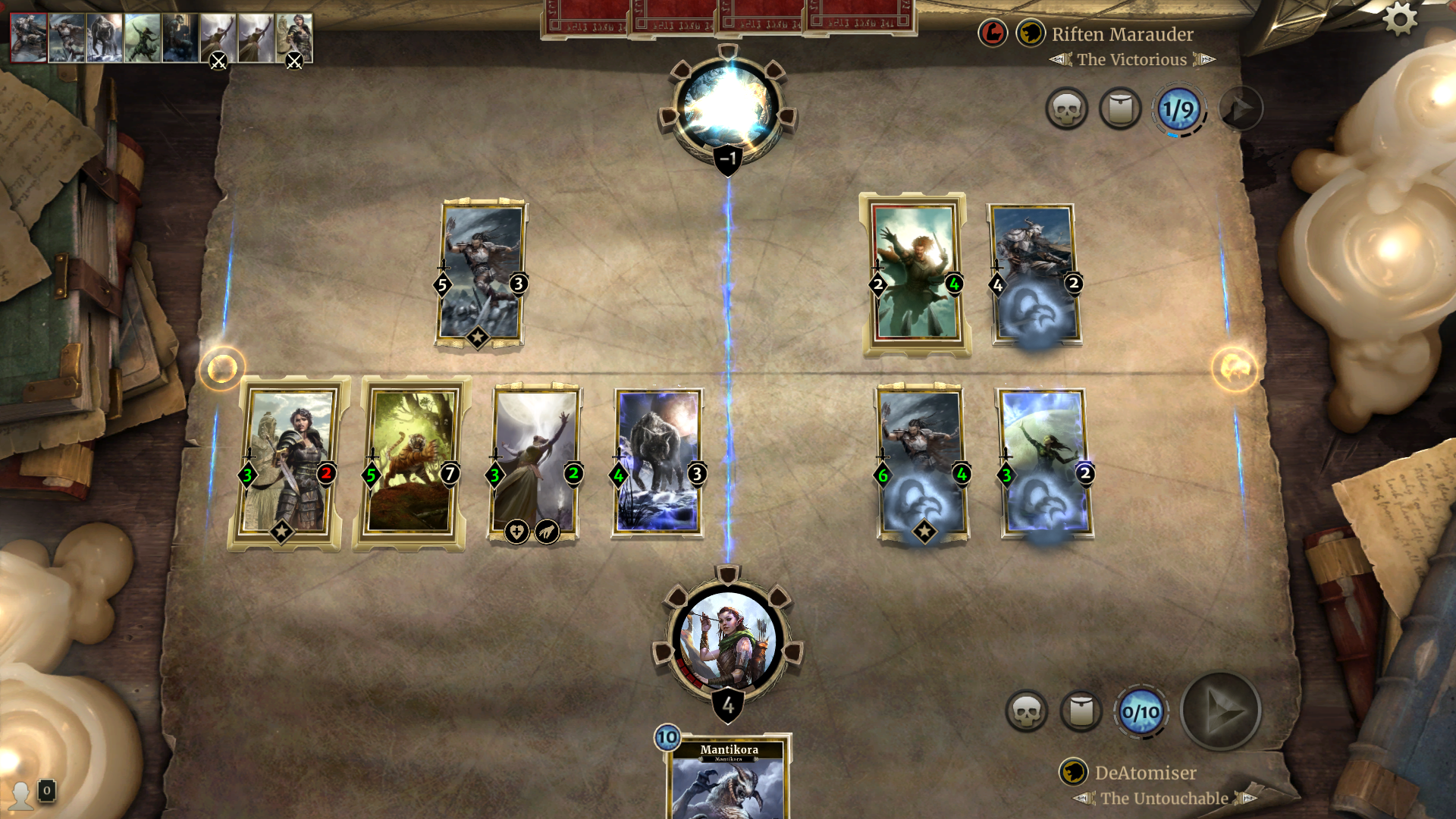 AI difficulty is strong in Elder Scrolls Legends, and I lost numerous games when testing out a new deck’s viability. While I definitely appreciate challenging AI play in any game, this did sometimes become frustrating, especially when I just wanted to see how a new deck played. Despite this, each win in this format nets you a few Soul Gems, used for creating cards, so it does a least offer a reward. For me, the PVP battles are far more enjoyable, and every three wins in this format gifts you some Gold and a card to add to your collection.

However, my favourite game type has to be The Arena, the game’s drafting format. To play, you’ll need to pay an entry free, or use one tournament entry ticket, which allows you to draft a temporary 30-card deck from a selection of three colour combinations, with 30 individual choices between three cards. You then battle either AI or other players, continuing until you have lost three times. Each win enables you to make another card choice to add to your deck, often from a choice of three good cards. 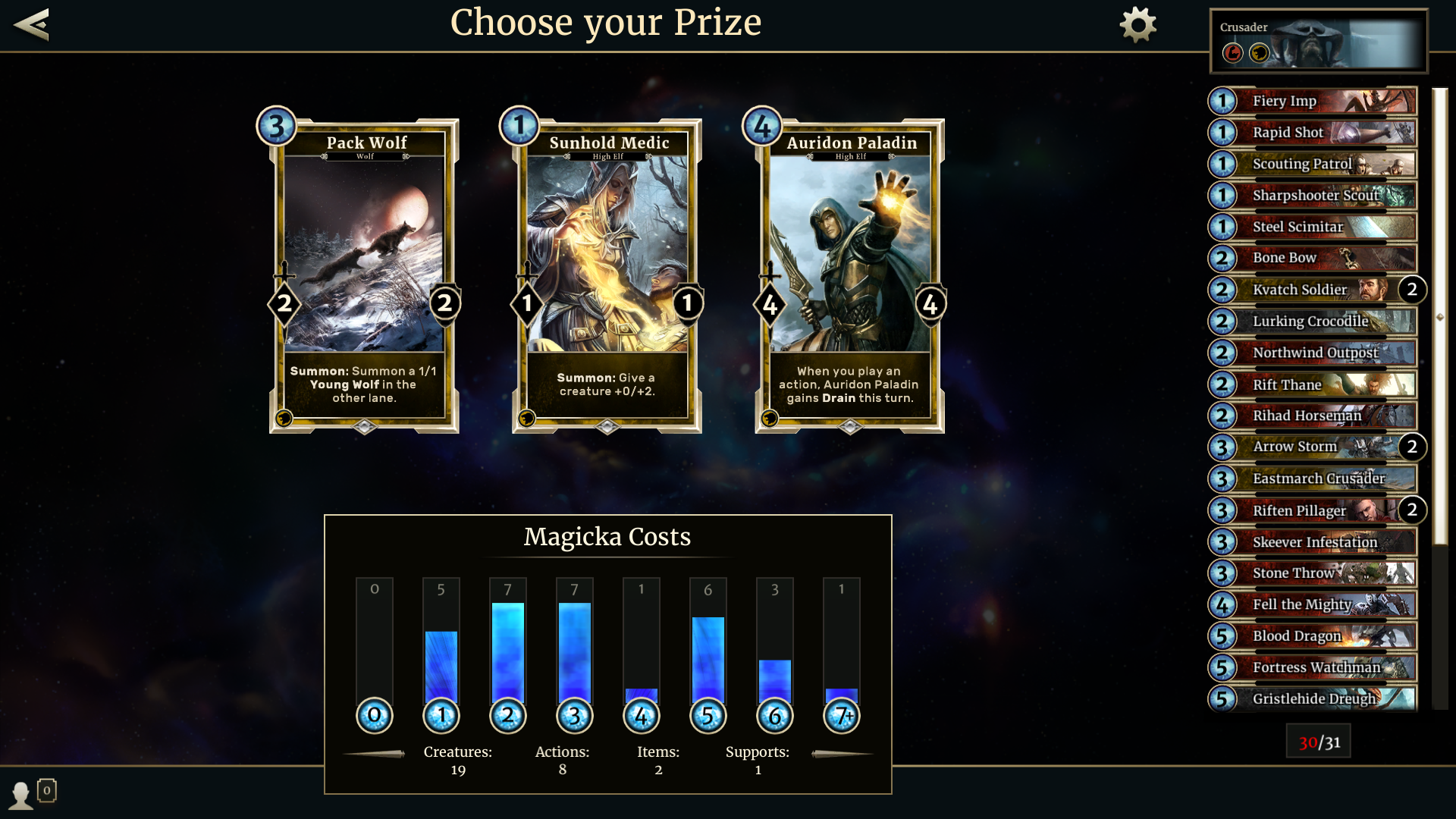 In the Solo Arena you battle against up to nine different (and difficult) AI opponents, sometimes with tough-to-build-around battlefield or start of the game rules, such as your opponent starts with a creature on the battlefield, or the shadow lane allows the first creature you attack with each turn to attack again. The Versus Arena tests your creation against evenly matched human opponents until you have succumbed to three losses. Your reward in these formats is dependent on your performance, but is always a little Gold and a booster pack, though you won’t see this reward until after you have been knocked out of the Arena. 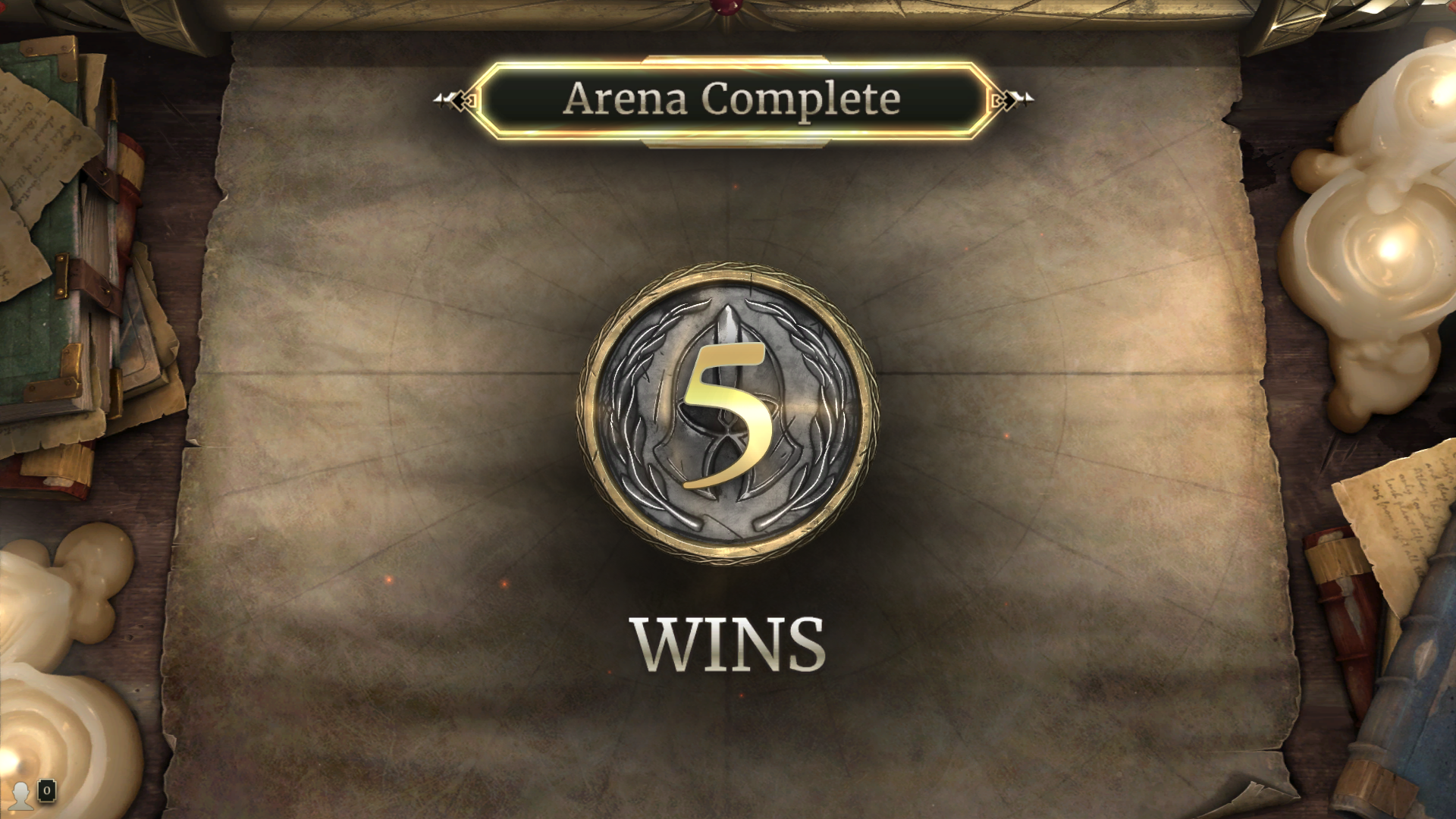 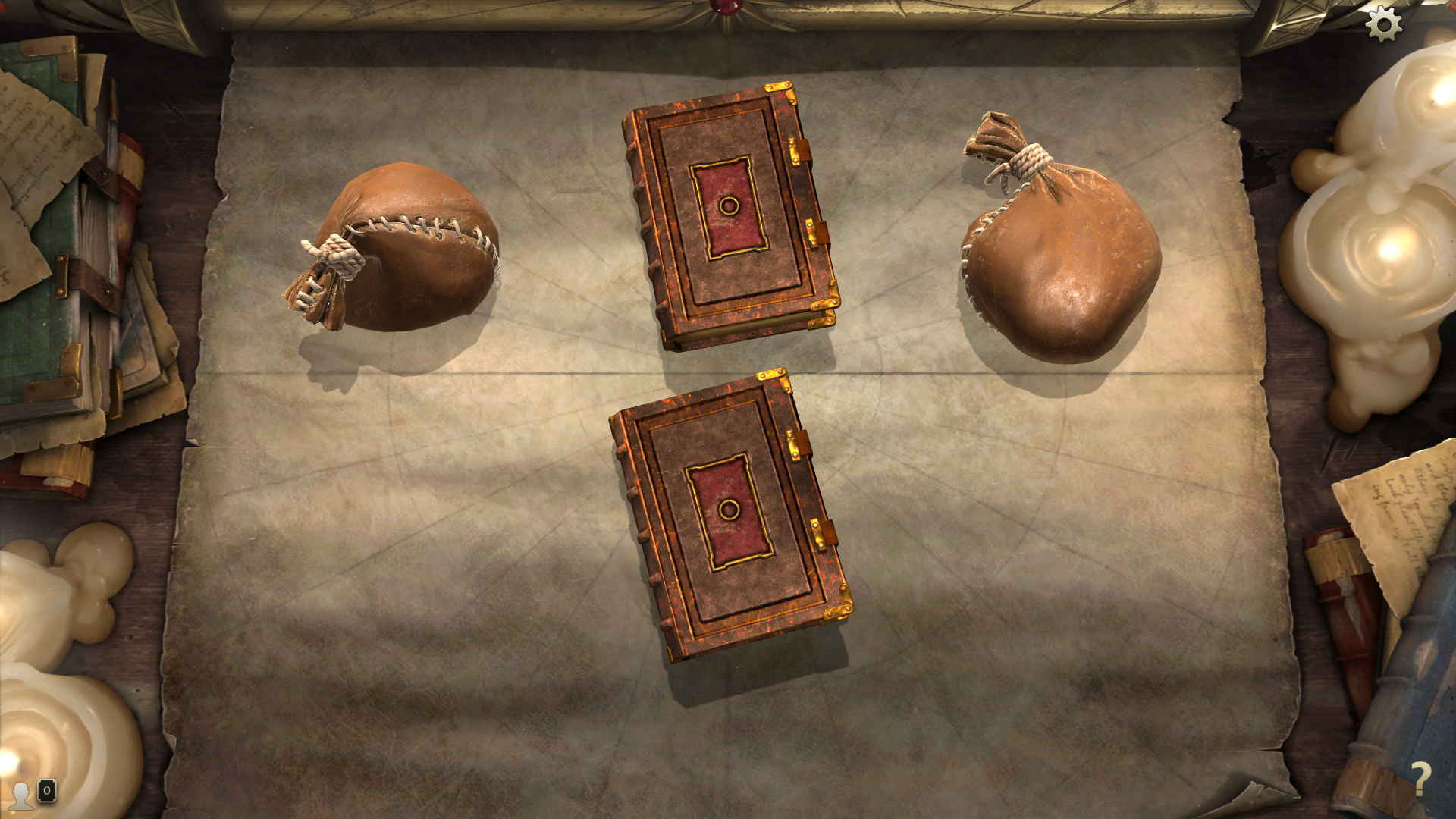 The level of your account determines which game modes are available to you, and as you level up, you will receive rewards from many aspects of the game, including individual cards or card upgrades, boosters, Gold, Event Tickets, and Soul Gems. You can also choose a quest to complete each day, which awards you Gold on completion. As such, the game continually feels rewarding, which keeps players coming back.

Another appealing feature is that the deck building process is fairly simple, something that definitely can’t be said for all CCGs. With five themed colours, as well as colourless and multicolour cards, you can easily make a deck that suits your type of play. Your limit is three of any one card in each deck, with the exception of Unique cards, which only allow one per deck. While drafting, you can filter cards by cost, rarity, colour, and set, although there’s no filter for card type, which can be frustrating when you’re trying to find that last action or creature to complete your deck. Having said that, Soul Gems do mean you can always create whatever you’re looking for – the ability to craft the specific card you need to make your deck work is fantastic. In addition, the card pool is well balanced, so whether you prefer very aggressive or very slow play, all decks are viable. The colour comparison seems well matched too, with no obvious favourite colour emerging in PVP decks.

The gameplay itself is pretty addictive, and with quick play PVP games and quests easily funding the Gold for entrance into the Arena, you get enough variation to keep you engaged. However, Prophecy and Rune Stones, the Elder Scrolls Legends’ answer to one sided games, are mostly not great value, often leaving you with a hand full of cards you can’t cast. With this in mind, it’s no surprise that many games end up being quite one sided, with one deck being particularly well suited to beating the other. That said, when that win out of nowhere happens, you quickly become very appreciative of your best cards. 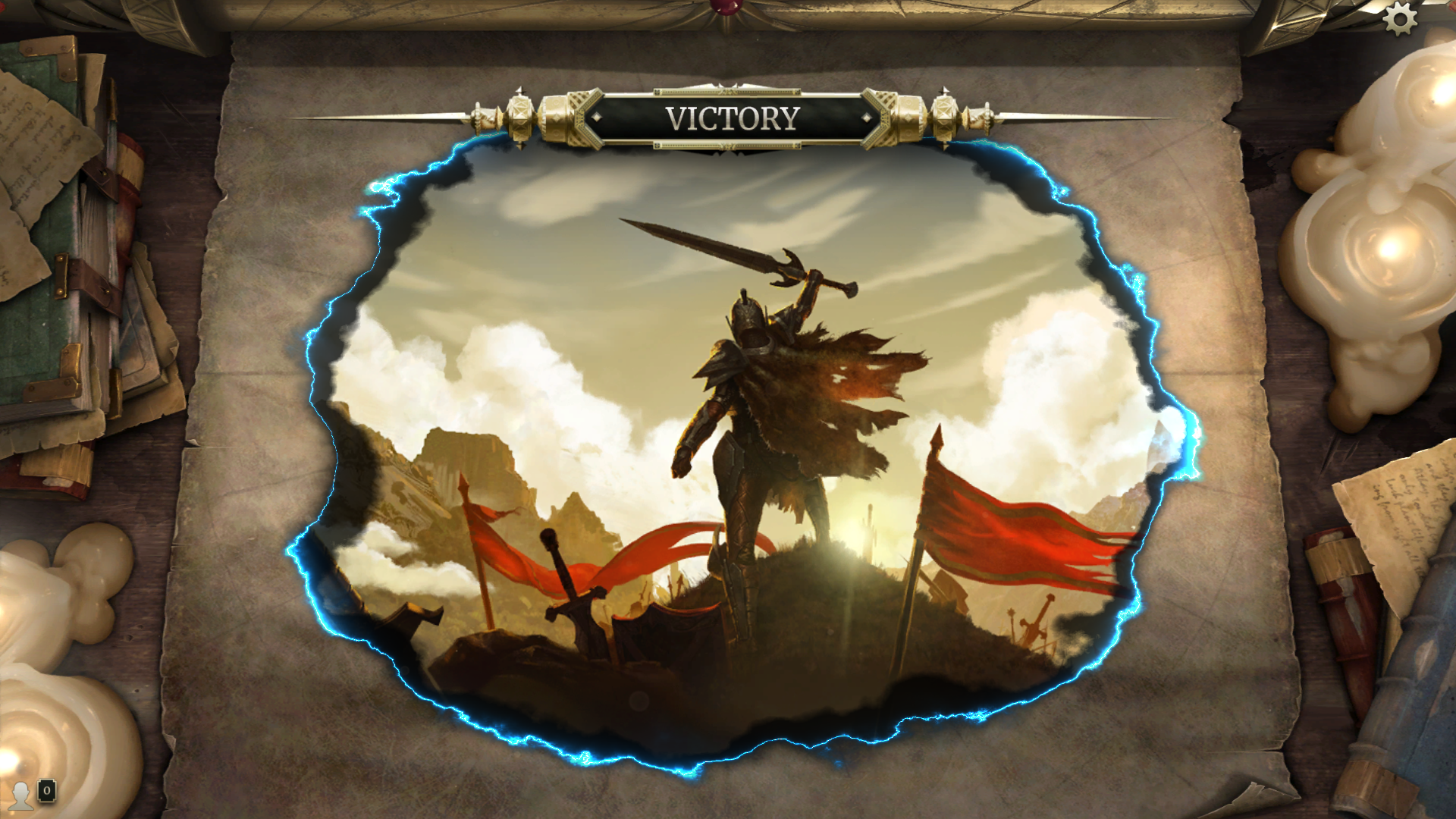 In particular, the one sided games are often defined by the Shadow Lane stopping an important attack on a creature that if successful, would prevent you taking damage next turn. While the Cover ability is fantastic as a strong, one-off creature protection, the ability to give it to any creature entering the battlefield is too strong. Despite that, in a well balanced deck, you hopefully have an action or two up your sleeve for just such an occasion.

If I could recommend just one aspect of the game, I’d have to choose the Solo Arena – absolutely where ESL stands out from other CCGs. There, you’ll find the most unique and challenging games, with special rules and well-built AI decks making for solid opposition. The demanding level of gameplay forces you to thoughtfully craft a deck that synergises well, and doesn’t leave you short at any end of your Magicka curve. The novel idea of not only not knowing what deck your opponent will have, but also not knowing what rules will apply to the upcoming game makes for an enjoyably challenging and varied experience.

Overall, I found the Elder Scrolls Legends to be an engaging and enjoyable game. The rules are easy to pick up, and quick games make for a good daily dose. While I do have some concerns with a couple of underlying aspects, the card pool is one of the best I’ve seen, and with tailored card creation and nuanced gameplay, Elder Scrolls Legends stands out in the CCG arena.

Elder Scrolls Legends is out now on PC, iOS for iPad and Mac and Android tablets, with phone apps coming this summer.

Moon Based Map Launched In Overwatch
How To Get The Most From Elder Scrolls Online: Morrowind
Close cookie popup